Unsolved Mysteries of the Arctic by Vilhjalmur Stefansson, 4/5

Written by a bona fide Arctic explorer, this book reflects a bygone era of exploration, when sane men packed up and left on insane adventures into unexplored territory from which they well knew they might never return. Indeed, every one of the five stories in this book involves death or disappearance, often punctuated by the horrors of starvation, betrayal, cannibalism and pure ineptitude. The author is not shy in drawing his own conclusions for each scenario and though his writing style is not the most entertaining, his first-hand experience and rational approach to the information available at the time make for a fascinating read.

I learned a lot from this book, such as that the Arctic, which I once imagined to be an abandoned ice desert, is (or at least, was) actually livable land, teeming with life. Unintuitively, the Inuit would move north during winter due to the abundance of game in the frozen landscape, killing everything from seals to polar bears without the aid of guns (often in territory in which well-armed Europeans managed to starve to death). I also learned a lot about scurvy, its causes and surprising psychological effects. According to Stefansson, scurvy plagued those explorers who tried to maintain a European diet, even when supplemented by fruits and vegetables. It was the author’s strong opinion that a diet consisting solely of native, fatty meat was the best way to stay healthy in the Arctic. It’s strange to think that the ketogenic diet is still controversial after over 80 years of arguments and studies.

Why I read it: an impulse buy in a used book store; for $3, who could resist? 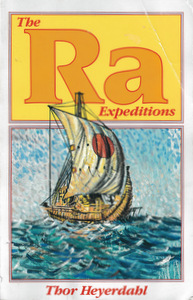 The Ra Expeditions by Thor Heyerdahl, 4/5

Heyerdahl is at it again, living out a real-life adventure story as he sails across the Atlantic in a boat made of reeds and rope.  I love how the author researches and resurrects ancient technology, but I didn’t find this book to be as fresh and compelling as his account of the Kon-Tiki expedition.  This was just a bit more calculated and agenda-driven, lacking the magical sense of adventure and soul that infused Heyerdahl’s earlier portrayal of his journey aboard the famous balsa wood raft.  I suspect it was the Kon-Tiki fame and corresponding sense of responsibility that stole away some of the spontaneity of his earlier adventures.

N.B. I would suggest nobody buy this 1988 Scribner Laidlaw edition, which not only lacks the original photographs but, annoyingly, still includes captions for them.

Why I read it: My brother intended to reread it during our trip to Norway, but I hijacked it.

I took this photo of the Ra II while visiting the Kon-Tiki Museum in Oslo, Norway (March 2016).

Aku-Aku: The Secret of Easter Island by Thor Heyerdahl, 5/5

This account of the first serious archaeological expedition to Easter Island could not be more exciting if it were set on a different planet entirely.  Heyerdahl and his crew unearthed ancient statues, carvings and structures that had never been seen by outsiders before and some of their finds amazed the native residents as much as themselves.  Even second-hand, the thrill of exploration and discovery was intoxicating.  I did experience moral qualms caused by the author’s sometimes manipulative approach to wheedling secrets out of the islanders and it was a bit disturbing how willingly they seemed to trade their ancient artifacts for cigarettes.  Still, it wasn’t a completely one-sided relationship–the expedition uncovered new statues, shed light on the island’s history, corroborated some of the local legends and encouraged the native people to remember their past and even revive some almost-forgotten traditional skills.

Why I read it: I’ve been an admirer of Heyerdahl since reading Kon-Tiki and wanted to read this book also before visiting the Kon-Tiki museum in Oslo, Norway, with my brother next month.

A picture quote I made: