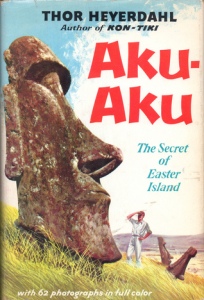 Aku-Aku: The Secret of Easter Island by Thor Heyerdahl, 5/5

This account of the first serious archaeological expedition to Easter Island could not be more exciting if it were set on a different planet entirely.  Heyerdahl and his crew unearthed ancient statues, carvings and structures that had never been seen by outsiders before and some of their finds amazed the native residents as much as themselves.  Even second-hand, the thrill of exploration and discovery was intoxicating.  I did experience moral qualms caused by the author’s sometimes manipulative approach to wheedling secrets out of the islanders and it was a bit disturbing how willingly they seemed to trade their ancient artifacts for cigarettes.  Still, it wasn’t a completely one-sided relationship–the expedition uncovered new statues, shed light on the island’s history, corroborated some of the local legends and encouraged the native people to remember their past and even revive some almost-forgotten traditional skills.

Why I read it: I’ve been an admirer of Heyerdahl since reading Kon-Tiki and wanted to read this book also before visiting the Kon-Tiki museum in Oslo, Norway, with my brother next month.

A picture quote I made: