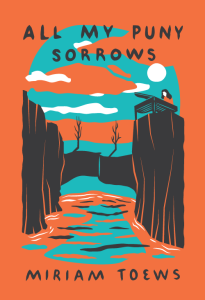 All My Puny Sorrows by Miriam Toews, 5/5

All my words are insufficient to convey how exquisite this semi-autobiographical novel is; I am reduced to a string of mere adjectives…raw, beautiful, funny, insightful, uplifting, bittersweet…none of which can fully capture this story of two sisters, one a struggling writer with a history of failed relationships and the other a beautiful concert pianist who possesses everything happiness requires…except the will to live.  Intensely personal, defiantly human, undeniably humorous, this book is a masterpiece and a privilege to read.

Why I read it: The first chapter is in McSweeney’s No. 48. 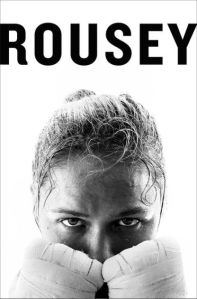 My Fight / Your Fight by Ronda Rousey with Maria Burns Ortiz, 3/5

I’ve never been much of a Rousey fan, but there’s an undeniably voyeuristic appeal to this first-hand account of the rise of the first woman to make it big in MMA.  Rousey’s work ethic, mental strength and accomplishments are inspiring and her prose is tolerable.  However, written before her only two losses, the book feels premature and some of the warrior rhetoric rings a bit hollow in light of her subsequent complete disappearance from the martial arts scene.

Why I read it: A guy from the gym brought his copy in for me.

As I Remember: An Autobiography by Lillian M. Gilbreth, 2/5

In contrast to the hilarious escapades and fascinating insights of her children’s book, Cheaper by the Dozen, this posthumously-published autobiography of their mother, Lillian Gilbreth, reads like a cross between a calendar of events and an address book.  Several things about the autobiography disturbed me, but it was hard to tell which were down to poor editing, which to Lillian herself and which to the practice of the times.  I’d guess that the book’s strange layout in disjointed paragraphs and the abundance of careless typos throughout the text were due to lack of editing.  The off-putting use of third-person tense was presumably Lillian’s personal choice, and I assume the bone-dry, unimaginative, unsentimental, relentlessly factual writing style was, at least in part, a reflection of her personality.  Since female academics and engineers were an oddity at the time, it is possible that she was used to being on the defensive and avoiding displays of vulnerability.  Conceivably, this attitude could be the cause of the chilling lack of emotion, personal details, and believable portrayals of relationships in this account, clearly at odds with the Gilbreths’ success and the obvious value they placed on the other people in their lives (even neighbors who were the barest of acquaintances received a mention in her story).

I feel this book failed on two fronts: it wasn’t demonstrative enough to achieve the humanity of a successful autobiography and it wasn’t technical enough to engender any real understanding of the family business (scientific management and efficiency), despite providing exhaustive accounts of business trips, academic papers and books published, lectures given and contracts secured.

[Why I read it: I enjoyed Cheaper by the Dozen very much and wanted to know more about the mother responsible for such a family.]

This autobiography is very funny and very dirty but not often, to my taste, both at the same time.  Despite the “knob jokes,” I quite enjoyed the casually-disorganised, friendly tone of the book and the inside view of a man who, contrary to his on-stage persona, seems more artist than arsehole.  Skinner’s self-deprecating but jubilant views on success and fame were entertaining without being alienating and his self-conscious defensiveness about his Roman Catholic faith was refreshing.

[Why I read it: I have always enjoyed Skinner’s panel show appearances on the likes of Have I Got News for You, QI, and Would I Lie to You,but didn’t know he’d written a book until Scottish comedian Kevin Bridges cited it as his inspiration to become a stand up comedian.  I found a free sample online of the first few pages and lost it at this part:

When I still lived in Birmingham, I dated a stunningly attractive woman.  I had been seeing her for about three weeks when I finally asked her where she lived.  It turns out she dwelt in what was, at the time, a very rough block of flats called Bath Court.  I said, in what I felt was a slightly Wildean tone, ‘The trouble with Bath Court is that the residents spend a good deal more time in the latter than they do in the former.’

‘Where’s “The Latter”?’ she asked.  I knew then that our love could never flourish. (6)

My library wouldn’t buy it for me (some bollocks about it not being available in the U.S.), but there was a copy in the first Waterstones book store I wandered in to in London.]

Finding out that a couple fellow altos in choir are atheists made me want to rerereread Lewis’ compelling description of his philosophical journey from childhood, through atheism to Christianity.  So much of what he says resonates with me and I always find it incredibly encouraging that such an intellectually uncompromising, well-read person would eventually find all signs pointing to God.  I don’t love the book just because it supports my own religious convictions, though; I admire Lewis’ frank, disarming writing style and analytical approach to life.