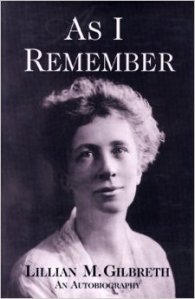 As I Remember: An Autobiography by Lillian M. Gilbreth, 2/5

In contrast to the hilarious escapades and fascinating insights of her children’s book, Cheaper by the Dozen, this posthumously-published autobiography of their mother, Lillian Gilbreth, reads like a cross between a calendar of events and an address book.  Several things about the autobiography disturbed me, but it was hard to tell which were down to poor editing, which to Lillian herself and which to the practice of the times.  I’d guess that the book’s strange layout in disjointed paragraphs and the abundance of careless typos throughout the text were due to lack of editing.  The off-putting use of third-person tense was presumably Lillian’s personal choice, and I assume the bone-dry, unimaginative, unsentimental, relentlessly factual writing style was, at least in part, a reflection of her personality.  Since female academics and engineers were an oddity at the time, it is possible that she was used to being on the defensive and avoiding displays of vulnerability.  Conceivably, this attitude could be the cause of the chilling lack of emotion, personal details, and believable portrayals of relationships in this account, clearly at odds with the Gilbreths’ success and the obvious value they placed on the other people in their lives (even neighbors who were the barest of acquaintances received a mention in her story).

I feel this book failed on two fronts: it wasn’t demonstrative enough to achieve the humanity of a successful autobiography and it wasn’t technical enough to engender any real understanding of the family business (scientific management and efficiency), despite providing exhaustive accounts of business trips, academic papers and books published, lectures given and contracts secured.

[Why I read it: I enjoyed Cheaper by the Dozen very much and wanted to know more about the mother responsible for such a family.]