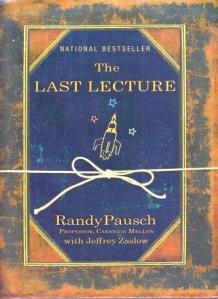 The Last Lecture by Randy Pausch with Jeffrey Zaslow, 2/5

Is it the mystery of death or mere crass curiosity that makes people so fascinated by “last words”?  For whatever reason, the appeal is undeniable.  However, it is also undeniable that everyone dies and, heartless as it may sound, imminent death is no philosophical or literary credential.  Mostly according to himself, Pausch was a great success as a human being: intelligent, successful, hard-working, loved and loving…but this short book somehow still left ample opportunity for me to repeatedly wonder when it was going to get profound, insightful, or helpful in any way.  It felt rather like a Wikipedia article written about someone, not because they had such a noteworthy effect on the world that it deserved lasting mention, but merely because they died.  (Interestingly, I later looked up Pausch’s Wikipedia article and that is almost exactly what happened–it was created the month he got his terminal diagnosis, not at any time during his career).   Perhaps people who are dealing with life-threatening illness would have a different perspective, but I felt this book had very little to offer besides voyeuristic appeal, though I’m sure that as a memoir for his family, it is beyond value.

Why I read it: My gym friend, Tyler, thought I might enjoy it and lent me his copy.