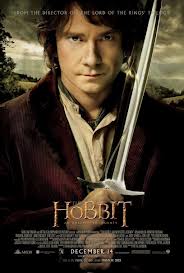 Hwæt!  If you don’t want to witness me taking this movie waaaay too seriously and drowning my keyboard in tears of anger during long sentences of painfully earnest prose, skip to the end and the more easily digestible “WTF Moments” section.

Also, if I thought this movie could be spoiled, I’d be warning you about spoilers right about now…

The Hobbit may be a slim book, a classic adventure tale for children, but it is written skillfully, with wit and humour, character development, a sense of the epic and a mythological backbone that makes it not inconsistent with its titanic offspring, The Lord of the Rings.  Because of this, I hoped (even expected) that it would be treated with the same respect, creativity and slavish attention to detail that J.R.R. Tolkien’s works had previously received at the hands of Peter Jackson.

The only image I could find of my beloved version of the book (Unwin Paperbacks 1966), Though mine is much more worn around the edges.

At worst, I reasoned, the first installment of a ~9 hour film treatment of a 278 page novel would suffer from additions, not deficiencies.  It would allow the audience to luxuriate (perhaps even excessively) in the details of the book, brought to life with no time or budget constraints (no missing Tom Bombadils or scouring of the Shires this time), and any additions would be understandable concessions to the film medium.

Sadly, Peter Jackson removed almost as much material as he added (which was a lot), and all with a blithe senselessness that left me very, very angry.  Tiny tidbits from the book, certain individual lines, props and scenes were a pittance, tossed at the audience as if they were generous concessions, a sort of shoulder nudge for the fans, “see, we read the same book as you” thing, while the larger portion of dialogue and plot details were straight from a movie trope library.  There is much I could have forgiven in a shorter film from an unproven director, but this is 3 hours of Peter Jackson doing Tolkien – it has to be so bad in order to be bad.  And it was. 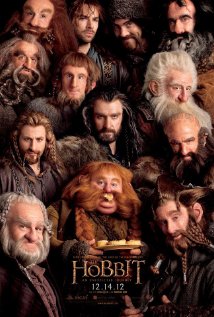 Over and over, the film disregarded actual drama and interest straight from the book in favour of tired, shallow cliches:

So much was needlessly and painfully spelled out:

And get this, folks, it actually turns BLUE when goblins are around! Blue, blue, BLUE!

Many details from the book that would have been easy to include in a movie of this length and budget were glaringly disregarded.  No coloured, hooded cloaks on the dwarves, no wet and weary pony rides with Bilbo reminiscing about his cozy hobbit hole (not for the first time), few songs, no blue, red and green pine cone firebombs from Gandalf, no darkness in the Goblin tunnels, no Glamdring and Orcrist flashing about during the fights, no this, no that.  But here, have some random scenes featuring Radagast hugging a hedgehog.

No review is complete without addressing positive aspects and I have to say that the riddle scene was quite brilliant.  I thought that it was well-done, entertaining, funny and delightfully consistent with the portrayal of Gollum in the LotR films.  It almost made it worth watching the whole film.  Also, Martin Freeman did a very good job, though no doubt he was confused to see his name in the top billing, given the lack of focus on his character in the film.

In conclusion, sure, it was a spectacle, but then so is your mom doing a 3 hour long rendition of “Mein Heir,” complete with fishnet stockings and a chair of dubious stability.  Call me a purist, but I was hoping for something spectacular instead.