The Turn of the Screw and Other Short Novels by Henry James, 3/5 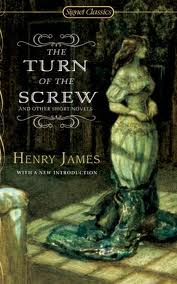 The six short novels in this collection were written over a span of 25 years (1878-1903) and the distinct progression in style and quality is startling.  The first two stories, An International Episode and Daisy Miller: A Study, are notably pointless, with a relentless use of national stereotypes and leaden, tedious dialogue that is even more pathetic for so obviously aspiring to the heights of Oscar Wilde.

The Aspern Papers is much more interesting, with its portrayal of human manipulation and rationalisation.  Unfortunately, an unsatisfying climax and denouement left me resentful of being tricked into thinking there was going to be much of a story.

I feel that The Altar of the Dead is the first good piece in the book – fascinating, suspenseful and deeply psychological, with just enough story to hold it together.  The Beast in the Jungle is very similar in style and was probably my favourite work in the book.

Reading The Turn of the Screw was the whole point of my Henry James expedition and it was worthwhile, if unsatisfying.  A Gothic thriller, many aspects of it reminded me of Jane Eyre and I could picture Northanger Abbey‘s Catherine Morland enjoying it rather more than I did.  James’ devious ambiguity and slow build-up of suspense left me annoyed but grudgingly admiring.

I should also mention Fred Kaplan’s exasperating introduction to the book, which provided numerous spoilers while insisting on laboured homosexual interpretations of even the most innocuous points of the stories.