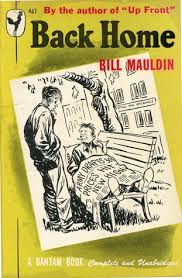 Back Home by Bill Mauldin, 2/5

Tedious political ramblings accompany this collection of aged cartoons by celebrated WWII cartoonist Bill Mauldin, who obviously had a rough transition back to a civilian career after the war.  I’ve always been put off by political cartoons in general because they tend to over-simplify complicated issues, mindlessly ridicule opposing viewpoints and, crucially, are usually not even funny.  The cartoons in this book are no exception and, I think, would appeal to few readers besides fans of Mauldin and those who are interested in an inside view of one person’s perspective of the political climate in post-WWII United States.

[Why I read it: I recognized Mauldin’s name and liked what I had previously seen of his army cartoons.]