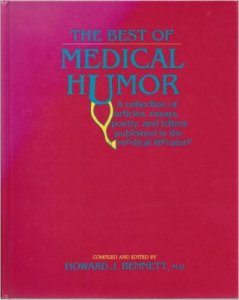 The Best of Medical Humor: A Collection of Articles, Essays, Poetry, and Letters Published in the Medical Literature, compiled and edited by Howard J. Bennett, M.D., 1/5

This relentlessly unfunny book was a chore to read and there were a couple of times I almost gave up (in retrospect, I wish I had).  Doubtless, having a medical background would have made it more enjoyable, but that does not completely explain the lack of laughs; after all, I’ve largely found that quality humor transcends topic and is recognizable even when it is not entirely understandable (why else would Scottish sitcoms be so enjoyable?).  In this case, though, most of the pieces reminded me of mediocre speech-openers, whose appeal lies mainly in stating the obvious and evoking half-hearted laughs of recognition from an audience who has steeled itself for the extremely boring lecture that is to follow.  The rest of the book mostly contains stuffy parodies of medical writing, which I imagine would seem most funny if you came across them unexpectedly in a serious medical journal.

In addition, it seems cheap that no single author is more represented in the collection than the compiler himself.  The fact that so much of his own work made it through the rigorous sorting process he describes in the introduction (he read over 800 articles, only choosing ones that could “make him laugh” and were “the best”) is very off-putting.  Things that are more entertaining than someone who fancies himself a comedian include getting a popcorn kernel stuck in your teeth, driving around a corner while holding a very full cup of coffee in one hand and stepping into the shower with a new sunburn.

[Why I read it: found while browsing in the thrift store.]