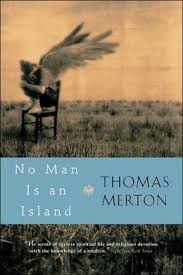 No Man Is an Island by Thomas Merton, 3/5

At first, I thought this collection of thoughts on 16 different spiritual topics was reasonably profound and insightful.  It wasn’t until Merton started saying, with blithe confidence, things I doubted or disagreed with that I missed the intellectual underpinnings characterising the likes of C.S. Lewis and G.K. Chesterton.  Merton’s unintellectual approach to spiritual matters is made palatable by his eloquent writing skills, perhaps dangerously so.  Those who approach this book wishing to be told what to think could quite possibly be led into error, but those who have already given thought to such topics will likely recognise much truth in what he says.

[Why I read it: the title is appealing and seemed relevant to my life at the moment.  I originally thought the phrase “no man is an island” came from this book, but it actually originated in a poem by the 17th-century poet John Donne.  Interestingly, from the same short poem comes the phrase “for whom the bell tolls.”]