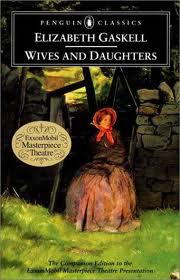 Wives and Daughters by Elizabeth Gaskell, 4/5

I approached this substantial novel from the unusual (for me) position of having previously twice watched and loved its BBC miniseries adaptation.  Because of this, I was unable to view the familiar story with fresh eyes and appreciate it on a purely literary level.  However, after a brief struggle, I resigned myself to the situation and, as a sort of companion to the miniseries, the novel was extremely enjoyable.  It almost felt like a behind-the-scenes supplement, providing to characters and scenes additional insights that did not come across in the film version.

A lack of archetypal characters distinguishes this book from the genre of sentimental, cloyingly romantic 19th century literature to which it could easily have belonged.   Instead of pronouncing overly-simplistic, moralistic judgments on all of her creations, Gaskell uses a delicate hand to portray the complicated motives and actions of a cast that is as flawed and human as it is appealing.

As my sister thoughtfully warned me beforehand, the novel ends abruptly, unfinished due to the author’s sudden death.  Two completing chapters, accompanied by an overall increase of the delightful sarcasm and humour that occasionally shines through, would be the only additions needed to make this novel perfectly delightful.

[Why I read it: it’s my sister’s favourite book.]