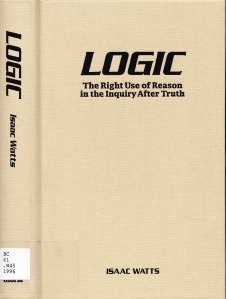 Logic: or, the Right Use of Reason in the Inquiry After Truth with a Variety of Rules to Guard Against Error in the Affairs of Religion and Human Life, as well as in the Sciences by Isaac Watts, D.D., 4/5

Watts’ optimistic attempt to break down and methodise the ideal workings of the human brain is a little too prosaic to leave much of an impression and a little too complicated to be easily applicable to everyday life.  However, the text is accessible, unpretentious and impeccably organised, addressing in four parts the topics of perception and ideas,  judgment and proposition, reason and syllogism, disposition and method.  Watts provides common-sense categorisations of all beings (divided into possible or actual, substance or mode, simple or compound, animate or inanimate, etc.), ideas (sensible, spiritual or abstracted, simple or complex, compound or collective, universal or particular, etc.), words (negative or positive, simple or complex, common or proper, etc.), propositions (universal, particular, indefinite or singular, affirmative or negative, etc), prejudices (arising from things, words, ourselves or other persons), syllogisms (universal or particular, negative or affirmative, simple, complex, conjunctive or compound, etc.) and methods (natural or arbitrary, synthetic or analytic).

The only part that went almost completely over my head was that on syllogisms, where I would have appreciated a clearer definition of terms and perhaps some diagrams.  My favourite sections were not those in which Watts laid out the reasonably obvious in painstaking detail, but rather the parts where he spoke wisely about human nature and tendencies.  I never tire of rediscovering that people are just people, no matter how far back in the past they existed.

Two parts that I found particularly insightful and affecting were those on overly-emotional people and sceptics.  On the first topic, Watts kindly advises that “this sort of people ought to judge of things and persons in their most sedate, peaceful, and composed hours of life, and reserve these judgments for their conduct at more unhappy seasons” (204).  About scepticism (a fault towards which I tend), Watts explains:

Scepticism is a contrary prejudice.  The dogmatist is sure of every thing, and the sceptic believes nothing.  Perhaps he has found himself often mistaken in matters of which he thought himself well assured in his younger days, and therefore he is afraid to give assent to anything again.  He sees so much show of reason for every opinion, and so many objections arising also against every doctrine, that he is ready to throw off the belief of every thing; he renounces at once the pursuit of truth, and contents himself to say, There is nothing certain.  It is well if, through the influence of such a temper, he does not cast away his religion as well as his philosophy, and abandon himself to a profane course of life, regardless of hell or heaven.

Both these prejudices last mentioned [dogmatism and scepticism], though they are so opposite to each other, yet they arise from the same spring, and that is, impatience of study, and want of diligent attention in the search of truth.  The dogmatist is in haste to believe something; he cannot keep himself long enough in suspense, till some bright and convincing evidence appear on one side, but throws himself casually into the sentiments of one party or another, and then he will hear no argument to the contrary.  The sceptic will not take pains to search things to the bottom, but when he sees difficulties on both sides, resolves to believe neither of them.  Humility of soul, patience in study, diligence in inquiry, with an honest zeal for truth would go a great way towards the cure of both these follies” (202).

[Why I read it: a PDF version (from my dad, I think) sat in my Downloads folder for years, but I never read it because I hate reading books on the computer.  I was about to delete the file, when I decided it still looked pretty interesting and ordered a proper copy from the library through inter-library loan.]