A Respectable Army: The Military Origins of the Republic, 1763-1789 by James Kirby Martin and Mark Edward Lender, 4/5 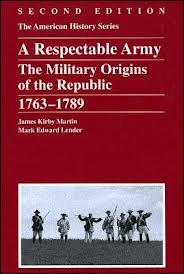 This book presents an engaging and not overly esoteric overview of George Washington’s army during the American Revolution.  It challenges the popular myth that all of the colonists participated equally, eagerly and selflessly to achieve independence, pointing out that the people who bore the brunt of the conflict were the poor and displaced in society.  I was surprised to learn that the colonists were rabidly anti standing-army, depending on the militia and the idea of the citizen-soldier (a romantic notion that produced lots of short-lived emotion but little dependable action).  Because of this, the Continental Army was looked down upon and abused by both politicians and populace.  War strategy and specific battles were worked tastefully into the text, providing interest without obscuring the bigger picture.  Without presenting any ground-breaking claims or research, this book manages to be very informative, interesting and well-written.