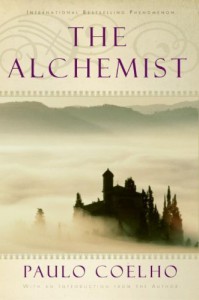 The Alchemist by Paulo Coelho, 2/5

This relentlessly aphoristic story of spiritual self-discovery derives its limited appeal, in my opinion, from a competent use of archetypal characters and scenarios.  However, Coelho’s seeming ambition to attain full-on Guru status results in a narrative that is less a stream from the fount of wisdom than a diarrhea-like flow of half-digested, context-less fragments borrowed from every major religion, with no regard for consistency or original meaning.  The result is the sort of appealingly spiritual drivel that sounds like nonsense to most people with strong religious beliefs, but that omnists and artistic atheists would call beautiful and “like soooooo deep, you know?”

Several similes involving bovine manure come easily to mind, but perhaps it is more apt to think of The Alchemist as a sort of amateur symphony composed of tiny, jumbled-up fragments of very famous, very beautiful music from the span of thousands of years.  Connoisseurs and practicers of music, recognising the butchery of varying sources, would likely find the result to be unoriginal, baffling and a ridiculous mockery of true Music.  Everyone else would likely think the symphony was the most profound thing they’d ever heard.

[Why I read it: the author was unrecommended to me by a friend, who thought I might hate Coelho enough to write an amusingly vitriolic review.  I’m afraid that, this time, we’ll both have to settle for mild disdain instead…]