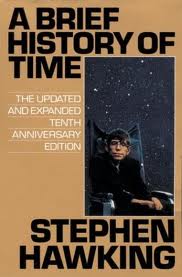 A Brief History of Time by Stephen Hawking, 4/5

If I learned anything from this book, it is that theoretical physics is an unfortunate area of interest for skeptical non-geniuses like myself.  When the skeptic in me complains about a lack of compelling evidence in support of complicated concepts, the non-genius assures me that I wouldn’t be able to understand such evidence anyway.

This book covers much more than just the topic of time, ranging from an overview of basic physics to an in-depth analysis of black holes.  I appreciate the tone of the book, which is enthusiastic without being overbearing or condescending.  Hawking demonstrates the rare virtue of valuing what is right over simply being right.  I especially appreciate how he expresses his doubts about the existence of God in a respectful and thought-provoking way instead of indulging in the vicious and insulting approach that has been popularised in recent years by many members of the scientific community.

My main complaint about the book is its age.  It has been fifteen years since the last update, which is quite a long time in terms of scientific advancement.  It killed me every time Hawking mentioned a theory that would likely be proved or disproved in “the next few years” because I know that such events have likely happened, but are too technical for me to learn about on my own.

Having established my basic inability to question or critique this book’s content and method of presentation, here is a brief sampling of some bits that made my brain really happy:

1. The strange fact that “we can measure time more accurately than length” (22).
2. Rockets have to travel more than 7 miles/second to escape earth’s gravity (42).
3. The concept that something can be both finite and without edges or boundaries (47).
4. Particles with spin 1/2 “do not look the same if one turns them through just one revolution: you have to turn them through two complete revolutions” (69).
5. If you picture real numbers on an x-axis, then imaginary numbers can be represented by the y-axis – being “in a sense numbers at right angles to ordinary real numbers” (139).
6. That Hawking’s “no-boundary” description of the universe closely matches both my own personal conception of God and God’s description of himself as “I am who I am.”

The universe would be completely self-contained and not affected by anything outside itself.  It would neither be created nor destroyed.  It would just BE” (141).

7.  A process called “renormalization” cancels out seemingly absurd infinities by introducing other infinities (173).
8. String theory’s “strings” have length but no other dimension (174).

Einstein made the revolutionary suggestion that gravity is not a force like other forces, but is a consequence of the fact that space-time is not flat, as had been previously assumed: it is curved, or “warped,” by the distribution of mass and energy in it.  Bodies like the earth are not made to move on curved orbits by a force called gravity; instead, they follow the nearest thing to a straight path in a curved space, which is called a geodesic.  A geodesic is the shortest (or longest) path between two nearby points.  For example, the surface of the earth is a two-dimensional curved space.  A geodesic on the earth is called a great circle, and is the shortest route between two points (Fig. 2.8).  As the geodesic is the shortest path between any two airports, this is the route an airline navigator will tell the pilot to fly along.  In general relativity, bodies always follow straight lines in four-dimensional space-time, but they nevertheless appear to us to move along curved paths in our three-dimensional space. (This is rather like watching an airplane flying over hilly ground.  Although it follows a straight line in three-dimensional space, its shadow follows a curved path on the two-dimensional ground.)  The mass of the sun curves space-time in such a way that although the earth follows a straight path in four-dimensional space-time, it appears to us to move along a circular orbit in three-dimensional space” (30).

Why don’t we notice all these extra dimensions, if they are really there?  Why do we see only three space dimensions and one time dimension?  The suggestion is that the other dimensions are curved up into a space of very small size, something like a million million million million millionth of an inch.  This is so small that we just don’t notice it: we see only one time dimension and three space dimensions, in which space-time is fairly flat.  It is like the surface of a straw.  If you look at it closely, you see it is two-dimensional (the position of a point on the straw is described by two numbers, the length along the straw and the distance round the circular direction).  But if you look at it from a distance, you don’t see the thickness of the straw and it looks one-dimensional (the position of a point is specified only by the length along the straw).  So it is with space-time: on a very small scale it is ten-dimensional and highly curved, but on bigger scales you don’t see the curvature or the extra dimensions” (179).

In Newton’s time it was possible for an educated person to have a grasp of the whole of human knowledge, at least in outline.  But since then, the pace of the development of science has made this impossible.  Because theories are always being changed to account for new observations, they are never properly digested or simplified so that ordinary people can understand them.  You have to be a specialist, and even then you can only hope to have a proper grasp of a small proportion of the scientific theories.  Further, the rate of progress is so rapid that what one learns at school or university is always a bit out of date.  Only a few people can keep up with the rapidly advancing frontier of knowledge, and they have to devote their whole time to it and specialize in a small area.  The rest of the population has little idea of the advances that are being made or the excitement they are generating” (185).

[Why I read it (twice): the Internet loves Stephen Hawking and I grew tired of being constantly reminded that I’d never actually read anything by him.  My enthusiasm during the first reading was a little diminished by feelings of mental inadequacy, so I read it through again, hoping to clarify the difficult bits.  I was certainly less bothered the second time around, but I think that was more because of a shallow familiarity with the content than from any mental breakthroughs.]