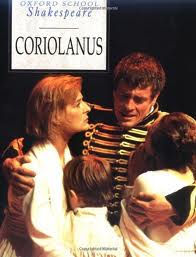 I can’t believe that I had never heard of this Shakespeare play before my brother recommended I watch the epic 2011 film version starring Ralph Fiennes and Gerard Butler.  After watching the film, I was very motivated to read the play for myself and enjoyed several additional parts that were changed or cut out of the movie.

The depth, drama and pathos of Coriolanus is belied by its uncompromising simplicity; the characters are given no facets, their decisions no moral judgments, their actions no alternatives.  And yet, there is a richness to its portrayal of humankind’s tendency to twist virtue into vice – the pride so deep it manifests as humility, the honesty that is damaging in its harshness, the courage that exists for itself alone instead of in its proper function as facilitator of other virtues.